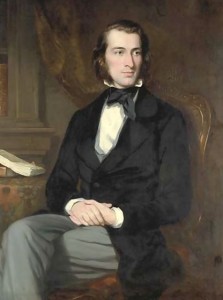 Matthew Piers Watt Boulton (1820-1894, pictured in portrait by Sir Francis Grant, ca. 1840) was the eldest grandson of the great engineer Matthew Boulton, and was named for James Watt, his grandfather’s partner-in-steam.   He inherited significant wealth and attended Eton and Trinity College, Cambridge, where his first tutor was the mathematician George Peacock (1791-1858), undergraduate friend of Charles Babbage and Alexander d’Arblay.    At Cambridge, Boulton studied mathematics, logic, and classics. He declined to apply for scholarships, despite his evident ability and in the face of entreaties from his tutor and his father, on the grounds that they bred unpleasant competitiveness – perhaps he was someone after my own heart.  It is likely that, for the same reason, he did not sit the Tripos examinations.

He was however of strong mathematical bent.  In 1868, he patented a method for lateral control of aircraft in flight, inventing what are now called ailerons.  Being a gentleman of wealth and leisure, he was able to read and write at will, and published translations of classic literature, some poetry, and pamphlets on solar energy, in addition to a work on aircraft stability.   Kinzer (2009) makes a compelling case for him also being the author of several works of philosophy published by someone calling himself “M. P. W. Bolton,” mostly in the 1860s.
Kinzer quotes the following words from Boulton’s paper,  “Has a Metaphysical Society any raison d’etre?”, read to a meeting of the Metaphysical Society, held at the Grosvenor Hotel on 9 April 1874 and chaired by William Gladstone:

There is no question, however apparently non-metaphysical, which may not be pursued till we come to the Metaphysical.  The question of whether Tarquin lived, and whether Lucretia committed suicide, is about as non-metaphysical as any question can be: yet disputants engaged in its discussion may persist till they open up the general question of the credibility of testimony; and this may open that of the credibility of memory, the nature of belief, what grounds we have for believing the existence of other persons, and an external world . . .  Whenever we try to bottom a question or subject, to use Locke’s word (the French word would be “approfondir”) then Metaphysics come in sight  . . . Every sentence involves, in some shape or other, the verb “to be”, and this, if pursued long enough, leads to the heart of Metaphysics  . . . Scientific persons often speak of Metaphysics  with scorn, calling them an Asylum Ignorantiae, useful enough to the vulgar, but in no way needed by themselves.  They imagine their science to be perfectly luminous, far above the lower regions where Metaphysical mists prevail.  But in reality they share the common lot:  the ideas of Force, Law, Cause, Substance, Causal or Active Matter, all dwell in the region of metaphysical twilight, not in the luminous ether. “