The photo shows the Greek Orthodox Cathedral of All Saints, at the corner of Pratt and Camden Streets in Camden, London. Before becoming an Orthodox Chuch in 1948, the building was an Anglican Church, most recently All Saints Camden. The building was designed by William Inwood and his son Henry Inwood in 1822-24, who had together earlier designed St. Pancras New Church in Euston, London. Both churches borrow from ancient Greek architecture, so it is fitting that one is now filled with Greek icons and text, and used for services in (modern) Greek. All Saints has a low-set but very deep choir balcony, extending from the entrance almost one-third the length of the church; this gives the church a quite intimate feel, despite the height of the main chapel. The current cathedral also has three large, low-hanging white glass chandeliers over the main chapel, which enhances the intimacy. I was reminded of the intimacy of Lloyd Wright’s Unity Temple in Chicago, a building which is similarly deceptive from the outside about the compactness of the space within.

When built, All Saints was called Camden Town Chapel, and its founding pastor was the Rev’d Alexander Charles Louis d’Arblay (1794-1837), son of the author Fanny Burney (1752-1840) and Alexandre-Jean-Baptiste Piochard D’Arblay (1754-1818), emigre French aristocrat and soldier, and adjutant-general to Lafayette. The Reverend d’Arblay was a poet and chess-player, and had been 10th wrangler in the Mathematics Tripos at Cambridge in 1818. He was a friend of fellow-student (but non-wrangler) Charles Babbage and of Senior Wrangler (1813) John Herschel, and a member of Babbage’s Analytical Society (forerunner of the Cambridge Philosophical Society).  Indeed, d’Arblay may have introduced Babbage to recent French mathematics. Alexander had been partly educated in France, and was aware of French trends in analysis, which in its rigour and formality was very different to the applied focus of British mathematics. From his time as an undergraduate, Babbage ran a campaign against the troglodytic British mathematics establishment, who were then opposed to rigour, formality and theory, and he sought to introduce modern analysis into mathematics teaching at Cambridge. British pure mathematics, as better mathematicians than I have argued, lost a century of progress as a result of its focus on certain types of applications at the expense of rigour.

Because of his First-Class degree, after his graduation d’Arblay was appointed a Fellow of Christ College Cambridge, which paid him a generous stipend his entire life (presumably while he remained unmarried). He had a remarkable ability to quickly learn and recite from memory long poems, and was obsessed with chess. He once missed an arranged meeting with his father when the latter was returning to France because he was engrossed in a chess game with his uncle, the admiral James Burney. d’Arblay was apparently bilingual, and wrote equally easily in English and French, and translated poetry and literary works from each language to the other. d’Arblay was ordained as a Church of England deacon in 1818, and as a priest on 11 April 1819 in St James’s Picadilly.  In the summer of 1821, he spent three months walking in Switzerland with Babbage and Herschel.

Through his mother, he was friends with the royal family and moved in high society.  For many years he was close friends with Mrs Clara Bolton (nee Clarissa Marion Verbeke) (1804-1839), who was, for a period, also a very close friend (and alleged mistress) of the young Benjamin Disraeli. She was the wife of George Buckley Bolton ( -1847), who was the Disraeli family doctor.  The evidence for the allegation that Mrs Bolton was a mistress of Disraeli does not convince me at all.

Ordained Reverend d’Arblay, d’Arblay served as minister of Camden Town Chapel from 1824-1837, and then briefly at Ely Chapel in High Holborn, London. He died of tuberculosis still unmarried, although engaged at the time of death to one Mary Anne Smith.  Thaning [1985] argues that d’Arblay was in unrequited love with Mrs Bolton, and that he proposed to her, unsuccessfully, shortly before becoming engaged to Mary Anne Smith.    The evidence Thaning presents for this claim, however, is not compelling.  Miss Smith became good friends with Madame d’Arblay, and lived with her after Alexander’s death.

Some of d’Arblay’s poetry is on the subject of chess. As the son of Fanny Burney, d’Arblay was the grandson of musician, composer and musicologist Charles Burney FRS (1726-1814), and thus from a remarkable family that included musicians, dancers, novelists, painters, historians, and an admiral.

Alongside d’Arblay, the founding organist at Camden Town Chapel was Samuel Wesley (1766-1837).

An index to posts about the Matherati is here.

POSTSCRIPT 1 [2011-12-24]: I have now seen d’Arblay’s poem, “Caissa Rediviva”, published anonymously in 1836. This is a long poem about a chess game. If there were any doubts about d’Arblay’s membership of the Matherati, this publication would allay them: The frontispiece to the poem poses a non-standard chess problem, which only someone with a subtle and agile mathmind could imagine: Given a particular chess board-configuration, find the precise sequence of 59 moves by White, each of which forces a single move by Black, and which ends with Black check-mating White with a particular move. 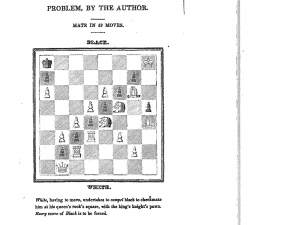 POSTSCRIPT 2 [2012-02-18]: Apparently, the Reverend d’Arblay suffered severely from depression for most of his adult life. Peter Sabor, in a recent talk at a conference in depression in the 18th century argues that d’Arblay’s depression may have arisen from his combination of great (and unrealistic) ambition and great indolence. But, of course, his apparent indolence may have been the result, not the cause, of his depression.

POSTSCRIPT 3 [2012-02-18]: d’Arblay was not the last member of the Matherati to become engrossed in intellectual pursuits. The most recent Senior Wrangler at Cambridge, Sean Eberhard (Tripos 2011), is described by his fellow collegians as, “most likely to neglect children to do crossword”.

0 Responses to “The Matherati: Alexander d’Arblay”