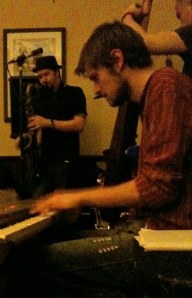 A quick shout-out to Marley Chingus Jazz Explosion, who play at The Caledonia alternate Friday nights, to where a friend invited me last night.  In truth, I’ve seen their posters for a couple of years, but had avoided going to hear them.  Their twee name makes them sound like a tribute band, and who wants to listen to people with insufficient imagination to play their own music, or even to invent their own name?
But the loss was mine.  What a great performance!  The quartet comprises Colin Lamont on drums, Dave Spencer on e-double bass, Bob Whittaker on tenor, and long-fingered medic Misha Gray on e-piano.    Last night they also had guesting another tenor player, whose name I did not catch.  (And Principal Cellist of the RLPO, Jonathan Aasgaard, was also in the crowd.)  Mingus, Monk, and Shorter featured (eg, JuJu), as well as their own fine compositions in brazen, hard-driving, funky, modal post-bop – serious early-60s jazz, before the harmonic emptiness of fusion took prominence.   What I particularly liked was that their solos did not sound the same from song to song; quite a few jazz performers really play the same solos whatever the underlying tune.   Gray’s trills, two-finger glissandos, and left-hand ostinatos were a delight, recalling early piano styles, and I also liked his occasional Shearing-style block chords.  He could do more with those, I think.
Pity about the name, though. 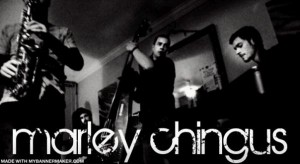