Charles Leonard Hamblin (1922-1985) was an Australian philosopher and one of Australia’s first computer scientists. His main early contributions to computing, which date from the mid 1950s, were the development and application of reverse polish notation and the zero-address store. He was also the developer of one of the first computer languages, GEORGE. Since his death, his ideas have become influential in the design of computer interaction protocols, and are expected to shape the next generation of e-commerce and machine-communication systems.
END_OF_DOCUMENT_TOKEN_TO_BE_REPLACED

This World is not Conclusion.
A Species stands beyond –
Invisible, as Music –
But positive, as Sound –
It beckons, and it baffles –
Philosophy – don’t know –
And through a Riddle, at the last –
Sagacity, must go –
To guess it, puzzles scholars –
To gain it, Men have borne
Contempt of Generations
And Crucifixion, shown –
Faith slips – and laughs, and rallies –
Blushes, if any see –
Plucks at a twig of Evidence –
And asks a Vane, the way –
Much Gesture, from the Pulpit –
Strong Hallelujahs roll –
Narcotics cannot still the Tooth
That nibbles at the soul –

John Bennett AO (1921-2010), first professor of computing in Australia and founder of Sydney University’s Basser Department of Computer Science, died last month.  The SMH obit, from which the lines below are taken, is here.

Emeritus Professor John Bennett AO was an internationally recognised Australian computing pioneer. Known variously as ”the Prof”, ”JMB” or ”Rusty”, he was a man with a voracious appetite for ideas, renowned for his eclectic interests, intellectual generosity, cosmopolitan hospitality and prodigious general knowledge.
As Australia’s first professor of computer science and foundation president of the Australian Computer Society, Bennett was an innovator, educator and mentor but at the end of his life he wished most to be remembered for his contribution to the construction of one of the world’s first computers, the Electronic Delay Storage Automatic Calculator (EDSAC). In 1947 at Cambridge University, as Maurice Wilkes’s first research student, he was responsible for the design, construction and testing of the main control unit and bootstrap facility for EDSAC and carried out the first structural engineering calculations on a computer as part of his PhD. Bennett’s work was critical to the success of EDSAC and was achieved with soldering irons and war-surplus valves in the old Cambridge anatomy dissecting rooms, still reeking of formalin.
. . .
The importance of his work on EDSAC was recognised by many who followed. In Cambridge he also pioneered the use of digital computers for X-ray crystallography in collaboration with John Kendrew (later a Nobel Prize winner), one of many productive collaborations.
He was recruited from Cambridge by Ferranti Manchester in 1950 to work on the Mark 1*. Colleague G. E. ”Tommy” Thomas recalls that when Ferranti’s promise to provide a computer for the 1951 Festival of Britain could not be fulfilled, ”John suggested … a machine to play the game of Nim against all comers … [It] was a great success. The machine was named Nimrod and is the precursor of the vast electronic games industry we know today.”
In 1952, Bennett married Mary Elkington, a London School of Economics and Political Science graduate in economics, who was working in another section at Ferranti. Moving to Ferranti’s London Computer Laboratory in 1953, Bennett worked in a team led by Bill Elliott, alongside Charles Owen, whose plug-in components enabled design of complete computers by non-engineers. Owen went on to design the IBM 360/30. Bennett remembered of the time, ”Whatever we touched was new; it gives you a great lift. We weren’t fully aware of what we were pioneering. We knew we had the best way but we weren’t doing it to convert people – we were doing it because it was a new tool which should get used. We knew we were ploughing new ground.”
Bennett was proud of being Australian and strongly felt the debt he owed for his education. When Harry Messel’s School of Physics group asked him in 1956 to head operations on SILLIAC (the Sydney version of ILLIAC, the University of Illinois Automatic Computer – faster than any machine then commercially available), he declined a more lucrative offer he had accepted from IBM and moved his family to Sydney.
The University of Sydney acknowledged computer science as a discipline by creating a chair for Bennett, the professor of physics (electronic computing) in 1961. Later the title became professor of computer science and head of the Basser department of computer science. Fostering industry relationships and ensuring a flow of graduates was a cornerstone of his tenure.
Bennett was determined that Australia should be part of the world computing scene and devoted much time and effort to international professional organisations. This was sometimes a trial for his staff. Arthur Sale recalls, ”I quickly learnt that John going away was the precursor to him returning with a big new idea. After a period when we could catch up with our individual work, John would tell us about the new thing that we just had to work on. Once it was the ARPAnet [Advanced Research Projects Agency Network] and nothing would suffice until we started to try to communicate with the Aloha satellite over Hawaii that had run out of gas to establish a link to Los Angeles and ARPAnet and lo and behold, the internet had come to Australia in the 1970s.”
In 1983, Bennett was appointed as an officer of the Order of Australia. After his retirement in 1986, he remained active, attending PhD seminars and lectures to ”stay up to date and offer a little advice” while continuing to earn recognition for his contributions to computer science for more than half a century.

Shi Tao (c. 1642-1707) was an artist, poet and scholar born into a high aristocratic family during the last days of the Ming Dynasty.  After the overthrow of the Ming in 1644 and the establishment of the Manchu Qing Dynasty, Shi Tao was raised and lived initially as a Buddhist monk. This poem is #4 from an illustrated album of 12 poems and paintings, 6 landscapes and 6 flowers, called Returning Home, published in 1695.  The brush styles of the calligraphy and the paintings match the mood of the respective poems in a superb fusion of text, image and idea.  Orchids are associated with “virtuous gentlemen” in Chinese literature, and with the friendship between them.  The last lines of the poem allude to the difficult political times in which the poem was written.  Clicking on the image will reveal the brambles Shi Tao has placed amidst the orchids. 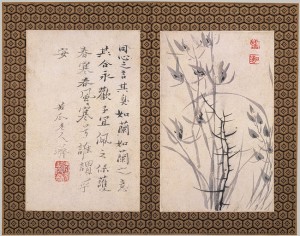 Orchids
Words from a sympathetic heart
Are as fragrant as orchids;
Like orchids in feeling,
They are agreeable and always joyous;
You should wear these orchids
To protect yourself from the spring chill;
When the spring winds are cold,
Who can say you are safe?

George Santayana was friends with Joe Trumbull Stickney.  In 1952, five decades after Stickney died from a brain tumour, Santayana wrote a letter about their friendship to William Kirkwood.  The letter is reproduced in facsimile in M. Kirkwood’s life of Santayana (1961, pp. 234-235).

Via di Santo Stefano Rotundo, 6
Rome, May 27, 1952
To Professor Wm. A. Kirkwood, Ph. D.
Trinity College, Toronto
Dear Sir,
It was a happy impulse that prompted you to think that the books you speak of and their annotations, and especially the lines in praise of Homer written by my friend Stickney would interest me. They have called up vividly in my mind the quality of his mind, although the verses represent a much earlier feeling for the classics, and a more conventional mood than he had in the years when we had our frequent moral fencing bouts; for there was a contrary drift in our views in spite of great sympathy in our tastes and pursuits. These verses are signed Sept. 15/ 90. Now Stickney graduated at Harvard in 1895, so that five years earlier he must have been about 17 years old. This explains to me the tone of the verses and also the fact that they advance line by line, seldom or never running over and breaking the next line at the cesura or before it, as he would surely have done in his maturity, when he doted on the dramatic interruptions of Shakespeare’s lines in Antony and Cleopatra in particular, and in all the later plays in general. [page break]
I see clearly the greater mastery and strength of impassioned drama, if impassioned drama is what you are in sympathy with; but I like to warn dogmatic critics of what a more naive art achieves in its impartial and peaceful labour and the risk that overcharged movement or surpluses [?] runs of drowning in its deathbed [?] waters. Every form of art has its charm and is appropriate in its place; but it is moral cramp to admit only one form of art to be legitimate or important. The reminder of this old debate that I had with Stickney who enlightened me more (precisely about the abuse of rhetoric) than I ever could enlighten him about the relativity of everything has been a pleasant reminder of younger days: although I am not sure that much progress towards reason and justice has been made since by critical opinion.
With best thanks and regards
Yours sincerely
G. Santayana

The first documenta I attended was documenta IX, in 1992.  Only two artworks there moved me:  a minimalist piece by Jean-Pierre Bertrand, and a work of conceptual tropicalia by Cildo Meireles.
Jean-Pierre Bertrand (1937-, France) presented a wide rectangle hung on the wall, divided into 10  narrow vertical panels.  Each panel was filled with organic materials mixed together and cooked  (honey, fruit juice, cooking-salt solution) to make a smooth paste, which he then glazed.  The panels were of two different colours:  reading from the left, panels 1 and 9 were red, the others off-white.  They shone quietly on the wall, their simplicity and timeless calm an antidote to the breathless featurism of the rest of documenta,  a thousand artworks each shouting “Me! Me! Look at Me!”.
A later work by Bertrand, Bright yellow green no. 1,  was acquired by the Art Gallery of NSW, described here. As with many post-war artists and composers, his art is profoundly concerned with the materiality of the medium he uses, the actual and specific physical attributes of the oils and paints, and the ways in which these attributes influence the visual image they are part of.    This concern by visual artists goes back at least to Turner.
Cildo Meireles (1948-, Brazil) fitted a square room with 2000 loudly ticking clocks on the walls, all set to different times, and hung 7600 yellow folding tape measures from the ceiling.  To walk through the room, one had to push through the tapes, unable to see more than a step or two in front at any time.  Nothing so evoked a tropical jungle as this installation:  unable to see much, having to push vines out of the way, and assaulted by an insect cacophony.
documenta 13 will be held in 2012, details here.