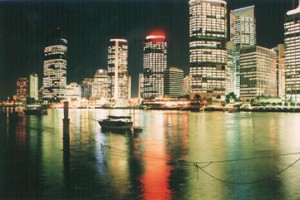 While posting about great jazz gigs, I remembered one superb performance I’d forgotten to record.   On 27 November 2009, I heard a gypsy-style jazz group play at Brisbane Jazz Club.  The Club has a million-dollar location at Kangaroo Point on the Brisbane River, looking back towards the city.   The photo above shows the view from the Club.  Watching performers against a large window showing a darkening city skyscape across the water was just magical.  I hope that the club can recover from the recent floods and return to their home.
The audience that night was about 50, including tables of people speaking Japanese and Russian.  The band was advertised as Cam Ford’s Gypsy Swingers, but I’m not sure everyone was there.  The line-up included  Ian Date, leader, on acoustic guitar and trumpet, his brother Nigel Date on acoustic guitar, Daniel Weltlinger on violin, and two players whose names I failed to catch – an acoustic guitarist and an electric bass player.    Later in the evening, the five were joined by another acoustic guitarist and a clarinet player (Dan?).  The music included some flamenco (to be expected with all those guitars) and was mostly 1920s Hot Club de France-style arrangements.    Most pieces had a fast, 4/4 tradjazz beat, with the bass playing a walking bass part.    This is a style of jazz I am not fond of, since much of it sounds the same, but the players showed real skill.   The violin or the lead guitar usually played a solo over the top, or sometimes, the two – violin and lead guitar – played a call-and-response duet.    These tunes were all done with energy, enthusiasm and skill.
With the full line-up of seven, the group played an absolutely superb arrangement of Caravan, a song I have blogged about before.  The arrangement began with the violin playing the melody over guitar rhythms and an ostinato bass.    This first run through was then followed by several choruses where the melody was played  in unison first by the violin and one guitar, and then with a second guitar playing a 2nd or a 3rd higher than the unison part.  The effect of this was something like an Hawaiiwan guitar, and created a sound that was iridescent, shimmering like the flickering lights on the river in the window behind the musicians.
To me, the stand-out  performer on the night was the violinist, Daniel Weltlinger, whom nothing seemed to faze.  At one point, when the two additional players joined, he was shouting chord changes to the clarinetist while improvising his own solo at the same time. 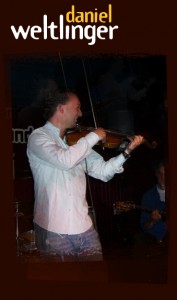 0 Responses to “Caravan in Brisbane”