The Tate Modern Exhibition earlier this year on the art of Theo van Doesburg (1883-1931) and the International Avant-Garde included some sublime art by Bauhaus artist, Ludwig Hirschfeld-Mack (1893-1965).  These installations were computer-generated realizations of his originally-mechanical Farbenlicht-Spiel (Colourlight-Play) of 1921.   Hirschfeld-Mack’s concept, shown here, was a machine for producing dynamic images, images which slowly changed their colours and shapes.  The images were the projection onto a 2-dimensional surface of regular two-dimensional polygons (triangles, quadrilaterals, circles, ellipses, etc) moving, apparently independently, in planes parallel in the third dimension (the dimension of the projection), i.e., appearing to move closer to or further away from the viewer.  As the example below may indicate, the resulting images are sublime.  Computer generation of such dynamic images is, of course, considerably easier now than with the mechanical means available to Hirschfeld-Mack. 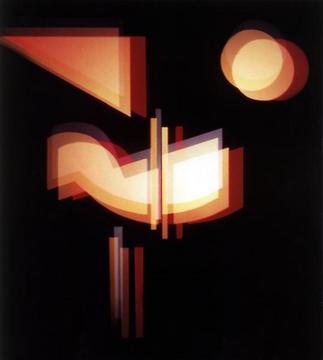 I have asked before what music is for.  I don’t know Hirschfeld-Mack’s intentions.  However, from my own experience, I know that watching this work can induce an altered mental state in its viewer, “sobering and quieting the mind, thus rendering it susceptible to divine influences,” in the words of Gita Sarabhai (talking about music).  The experience of watching this work is intensely meditative, akin to listening attentively to the slowly-changing music of Morton Feldman (1926-1987).
Hirschfeld-Mack was the only Bauhaus artist to end his career in Australia, a career Helen Webberley describes here.    His art is another instance of the flowering of geometric abstraction in art in the first three decades of the 20th century.  In the last decades of the 19th century and the early years of the 20th, there was widespread public interest in the ideas which had recently revolutionized the study of geometry in pure mathematics.  These ideas – the manifestation of postmodernism in pure mathematics a century before it appeared in other disciplines – first involved the rigorous study of alternatives to Euclidean geometry during the 19th century, a study undertaken when there still considerably ambiguity about the epistemological status of such alternatives, and then the realization (initially by Mario Pieri and David Hilbert in the 1890s) that one could articulate and study formal axiomatic systems for geometry without regard to any possible real-world instantiation of them.  Geometry was no longer being studied in order to represent or model the world we live in, but for its own sake, for its inherent mathematical beauty and structure.
At the same time, there was interest – in mathematics and in the wider (European) culture – in additional dimensions of reality.    The concept of a “fourth dimension” of space motivated many artists, including Kazimir Malevich and Piet Mondrian; both men sought to represent these new ideas from geometry in their art, and said so explicitly.  Similarly, the cubists sought to present an object from all perspectives simultaneously, the futurists to capture the dynanism of machines and the colours of metals, and the constructivists to distill visual art to its essential and abstract forms and colours.   Of course, having many times flown over the Netherlands,  I have always seen Mondrian’s art as straightforward landscape painting, painting the Dutch countryside from above.
Geometric abstraction reappeared in the art of Brazil in the 1960s, and in so-called minimalist art in the USA and Europe, from the 1960s onwards.  Like Hirschfeld-Mack’s work, much of that art is sublime and deeply spiritual.  More of that anon.
References:
M Dabrowski [1992]:  Malevich and Mondrian:  nonobjective form as the expression of the “absolute’”.  pp. 145-168, in: GH Roman and VH Marquardt (Editors): The Avant-Garde Frontier: Russia Meets the West, 1910-1930. University Press of Florida, Gainesville, FL, USA.
Gladys Fabre and Doris Wintgens Hotte (Editors), Michael White (Consultant Editor) [2009]:  Van Doesburg & the International Avant-Garde.  Constructing a New World.  London, UK:  Tate Publishing.
LD Henderson [1983]: The Fourth Dimension and Non-Euclidean Geometry in Modern Art. Princeton University Press, Princeton, NJ, USA.
David Hilbert [1899]: Grundlagen der Geometrie. pp. 3-92, in: Festschrift zur Feier der Enthullung des Gauss-Weber-Denkmals in Gottingen. Teubner, Leipzig, Germany.   Translated by EJ Townsend as:  Foundations of Geometry, Open Court, Chicago, IL, USA. 1910.
Mario Pieri [1895]:  Sui principi che reggiono la geometria di posizione.  Atti della Reale Accademia delle scienze di Torino, 30: 54-108.
Mario Pieri [1897-98]: I principii della geometria di posizione composti in sistema logico deduttivo.  Memorie della Reale Accademia delle Scienze di Torino 2, 48: 1-62.