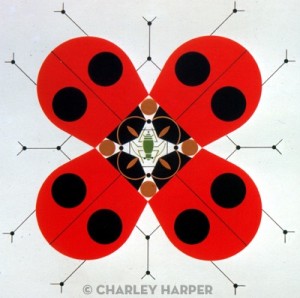 Music critic Alex Ross discusses John Cage’s music in a recent article in The New Yorker.    Ross goes some way before he trips up, using those dreaded  – and completely inappropriate – words “randomness” and “chance”:

Later in the forties, he [Cage] laid out “gamuts” – gridlike arrays of preset sounds – trying to go from one to the next without consciously shaping the outcome.  He read widely in South Asian and East Asian thought, his readings guided by the young Indian musician Gita Sarabhai and, later, by the Zen scholar Daisetz Suzuki.  Sarabhai supplied him with a pivotal formulation of music’s purpose:  “to sober and quiet the mind, thus rendering it susceptible to divine influences.”  Cage also looked to Meister Eckhart and Thomas Aquinas, finding another motto in Aquinas’s declaration that “art imitates nature in the manner of its operation.”
. . .
In 1951, writing the closing movement of his Concerto for Prepared Piano, he finally let nature run its course, flipping coins and consulting the I Ching to determine which elements of his charts should come next.   “Music of Changes,” a forty-three-minute piece of solo piano, was written entirely in this manner, the labor-intensive process consuming most of a year.
As randomness took over, so did noise.  “Imaginary Landscape No. 4″ employs twelve radios, whose tuning, [page-break] volume, and tone are governed by chance operations.”  [pages 57-58]

That even such a sympathetic, literate, and erudite observer as Alex Ross should misconstrue what Cage was doing with the I Ching as based on chance events is disappointing.  But, as I’ve argued before about Cage’s music, the belief that the material world is all there is is so deeply entrenched in contemporary western culture that westerners seem rarely able to conceive of other ways of being.  Tossing coins may seem to be a chance operation to someone unversed in eastern philosophy, but was surely not to John Cage.
References:
Alex Ross [2010]:  Searching for silence.  John Cage’s art of noise.   The New Yorker, 4 October 2010, pp. 52-61.
James Pritchett [1993]:  The Music of John Cage.  Cambridge, UK:  Cambridge University Press.
Here are other posts on music and art.

0 Responses to “Chance would be a fine thing”