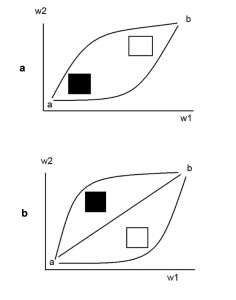 Howard Gardner’s theory of multiple intelligences includes an intelligence he called Logical-Mathematical Intelligence, the ability to reason about numbers, shapes and structure, to think logically and abstractly.   In truth, there are several different capabilities in this broad category of intelligence – being good at pure mathematics does not necessarily make you good at abstraction, and vice versa, and so the set of great mathematicians and the set of great computer programmers, for example, are not identical.
But there is definitely a cast of mind we might call mathmind.   As well as the usual suspects, such as Euclid, Newton and Einstein, there are many others with this cast of mind.  For example, Thomas Harriott (c. 1560-1621), inventor of the less-than symbol, and the first person to draw the  moon with a telescope was one.   Newton’s friend, Nicolas Fatio de Duiller (1664-1753), was another.   In the talented 18th-century family of Charles Burney, whose relatives and children included musicians, dancers, artists, and writers (and an admiral), Charles’ grandson, Alexander d’Arblay (1794-1837), the son of writer Fanny Burney, was 10th wrangler in the Mathematics Tripos at Cambridge in 1818, and played chess to a high standard.  He was friends with Charles Babbage, also a student at Cambridge at the time, and a member of the Analytical Society which Babbage had co-founded; this was an attempt to modernize the teaching of pure mathematics in Britain by importing the rigor and notation of continental analysis, which d’Arblay had already encountered as a school student in France.
And there are people with mathmind right up to the present day.   The Guardian a year ago carried an obituary, written by a family member, of Joan Burchardt, who was described as follows:

My aunt, Joan Burchardt, who has died aged 91, had a full and interesting life as an aircraft engineer, a teacher of physics and maths, an amateur astronomer, goat farmer and volunteer for Oxfam. If you had heard her talking over the gate of her smallholding near Sherborne, Dorset, you might have thought she was a figure from the past. In fact, if she represented anything, it was the modern, independent-minded energy and intelligence of England. In her 80s she mastered the latest computer software coding.”

Since language and text have dominated modern Western culture these last few centuries, our culture’s histories are mostly written in words.   These histories favor the literate, who naturally tend to write about each other.    Clive James’ book of a lifetime’s reading and thinking, Cultural Amnesia (2007), for instance, lists just 1 musician and 1 film-maker in his 126 profiles, and includes not a single mathematician or scientist.     It is testimony to text’s continuing dominance in our culture, despite our society’s deep-seated, long-standing reliance on sophisticated technology and engineering, that we do not celebrate more the matherati.
On this page you will find an index to Vukutu posts about the Matherati.
FOOTNOTE: The image above shows the equivalence classes of directed homotopy (or, dihomotopy) paths in 2-dimensional spaces with two holes (shown as the black and white boxes). The two diagrams model situations where there are two alternative courses of action (eg, two possible directions) represented respectively by the horizontal and vertical axes.  The paths on each diagram correspond to different choices of interleaving of these two types of actions.  The word directed is used because actions happen in sequence, represented by movement from the lower left of each diagram to the upper right.  The word homotopy refers to paths which can be smoothly deformed into one another without crossing one of the holes.  The upper diagram shows there are just two classes of dihomotopically-equivalent paths from lower-left to upper-right, while the lower diagram (where the holes are positioned differently) has three such dihomotopic equivalence classes.  Of course, depending on the precise definitions of action combinations, the upper diagram may in fact reveal four equivalence classes, if paths that first skirt above the black hole and then beneath the white one (or vice versa) are permitted.  Applications of these ideas occur in concurrency theory in computer science and in theoretical physics.