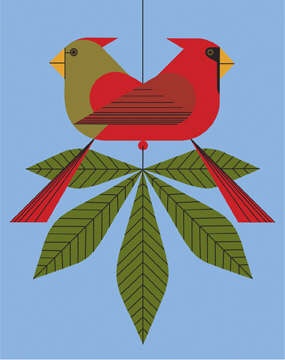 Brian Dillon reviews a British touring exhibition of the art of John Cage, currently at the Baltic Mill Gateshead.
Two quibbles:  First, someone who compare’s Cage’s 4′ 33” to a blank gallery wall hasn’t actually listened to the piece.  If Dillon had compared it to a glass window in the gallery wall allowing a view of the outside of the gallery, then he would have made some sense.  But Cage’s composition is not about silence, or even pure sound, for either of which a blank gallery wall might be an appropriate visual representation.  The composition is about ambient sound, and about what sounds count as music in our culture.
Second, Dillon rightly mentions that the procedures used by Cage for musical composition from 1950 onwards (and later for poetry and visual art) were based on the Taoist I Ching.  But he wrongly describes these procedures as being based on “the philosophy of chance.”     Although widespread, this view is nonsense, accurate neither as to what Cage was doing, nor even as to what he may have thought he was doing.   Anyone subscribing to the Taoist philosophy underlying them understands the I Ching procedures as examplifying and manifesting hidden causal mechanisms, not chance.   The point of the underlying philosophy is that the random-looking events that result from the procedures express something unique, time-dependent, and personal to the specific person invoking the I Ching at the particular time they invoke it. So, to a Taoist, the resulting music or art is not “chance” or “random” or “aleatoric” at all, but profoundly deterministic, being the necessary consequential expression of deep, synchronistic, spiritual forces. I don’t know if Cage was himself a Taoist (I’m not sure that anyone does), but to an adherent of Taoist philosophy Cage’s own beliefs or attitudes are irrelevant to the workings of these forces.  I sense that Cage had sufficient understanding of Taoist and Zen ideas (Zen being the Japanese version of Taoism) to recognize this particular feature:  that to an adherent of the philosophy the beliefs of the invoker of the procedures are irrelevant.
In my experience, the idea that the I Ching is a deterministic process is a hard one for many modern westerners to understand, let alone to accept, so entrenched is the prevailing western view that the material realm is all there is.  This entrenched view is only historically recent in the west:  Isaac Newton, for example, was a believer in the existence of cosmic spiritual forces, and thought he had found the laws which governed their operation.    Obversely, many easterners in my experience have difficulty with notions of uncertainty and chance; if all events are subject to hidden causal forces, the concepts of randomness and of alternative possible futures make no sense.  My experience here includes making presentations and leading discussions on scenario analyses with senior managers of Asian multinationals.
We are two birds swimming, each circling the pond, warily, neither understanding the other, neither flying away.
References:
Kyle Gann [2010]: No Such Thing as Silence.  John Cage’s 4′ 33”.  New Haven, CT, USA:  Yale University Press.
James Pritchett [1993]:  The Music of John Cage.  Cambridge, UK:  Cambridge University Press.

0 Responses to “At Swim-two-birds”