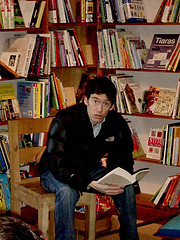 I heard Stewart speak in December 2009, shortly after his pre-selection, at a bookshop in Penrith.  At the time, he was walking across his prospective constituency as a way to learn about it and to meet people.  He was most impressive – intelligent, urbane, witty, sincere, respectful, and also very laid-back.  He read from his book on Iraq, and talked about Afghanistan and Iraq, even quoting the poetry of TS Eliot.  The audience then had a good debate with him and with each other about do-gooding foreign wars and about the UK-USA relationship.  From their comments, I would say about half the audience were probably Labour voters.
Stewart, as good a facilitator as Bill Clinton or Barack Obama, got us all to say who we were and what were our concerns.     He did not  interrupt anyone, listened attentively and respectfully (even when he disagreed), and remembered everyone’s name and profession; I’m sure he charmed some of the audience there and then into voting for him.    When someone said they’d like to vote for him personally, but could not face voting Conservative (calling it “the Work-House Party”), he laughed at the description and said this was a decision they’d have to make for themself.  He didn’t even present a case for voting for him personally while ignoring the party label, as most politicians I have known would have done at that point.    In fact, he proceeded to give an honest assessment of his own strengths and weaknesses as a candidate – if he was selling himself, this was an extremely soft-sell.
The whole event struck me as remarkable:  Here was a modern-day soldier, colonial administrator, and educator of America’s nomenklatura campaigning in rural Cumbria and doing so very explicitly on his Iraq and Afghan experience.  And, more surprisingly, people seemed to respond with great passion to his message, with its key theme being that the West needs to understand and accept the limits to its own power to change other societies.  It says something about the effect these two wars have had on people in Britain that such a message would have even been listened to seriously in a local campaign, let alone that it would resonate with people.
Some British commentators have compared Stewart to Winston Churchill, who also had had colonial military adventures and had written some damn fine and exciting prose before entering Parliament.   I think that other writer and warrior Teddy Roosevelt is a better comparison, as TR appears (from this distance) to have been more respectful of human diversity and difference than was young Winnie.    One does not have to be a Conservative to be pleased that a person of Rory Stewart’s intelligence, sophistication, integrity, courage and wisdom should now be in the Mother of Parliaments.
NOTES:
Another account of the same meeting here.   My memory is that the dog was not small, as the photographs confirm.
Here is a profile from National Geographic (undated, but before Stewart’s appointment as a Harvard professor).
And here is Ian Parker’s profile in The New Yorker (2010-11-15).
Through his American mother, Winston Churchill knew TR, and once stayed with the Roosevelts in Albany when TR was Governor of New York.