Being a traveling organ recitalist has its own challenges.  All pipe and most electric organs are unique.  A recitalist needs to practice beforehand on the organ he or she will perform on, to get a feel for the instrument’s capabilities, to know its sounds and colours, and to become familiar with its physical layout.  Thus, deciding what music best fits a particular organ and how best to voice that music on that organ requires the organist to spend some time alone with the organ.  Organs are one of the last remaining examples in modern Western life of the primacy of the local, the particular, the here-and-now,  over the universal and general and eternal (in the analysis of Stephen Toulmin).  It is not surprising that the art of improvisation remains alive in organ recitals, alone among current classical music performance practices. 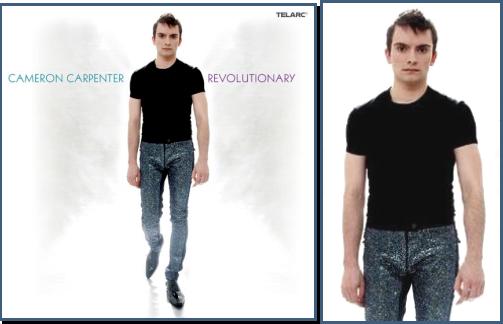 For this reason, American organist Cameron Carpenter tries his best not to decide recital programs in advance of seeing the organ.  Last night in Manchester, playing on a large cinema-style organ in the Bridgewater Hall (not the Hall Organ), he gave an outstanding performance of the following works (as best I can recall):

What a wonderful, thought-provoking performance this was!  Before the concert even began, Carpenter spent 20 minutes in the lobby, greeting members of the audience as they arrived, something unknown in classical music (at least since Franz Liszt, who, in addition, chatted to the audience between pieces and even while playing).   Carpenter’s performances then likewise played masterful havoc with the fusty organ recital tradition!   But not arbitrarily – the guy had thought intelligently about the music and knew what he was doing.  For instance, in Bach’s proto-minimalist Prelude in C minor (WTC, Book I), the left-hand part was taken by the feet, and the subtle melody which emerges from the leading notes of the right-hand part was played on a different keyboard (and thus with different tone colours) to the notes from which it emerges.  Pianists often foreground the leading melody notes while pushing the other right-hand notes into the background; Carpenter did not do this, which I think better matches the minimalist tenor of the music – ie, it is the background here that is really the foreground.   His was an intelligent and reflective treatment, and showed an understanding of the ideas in this music.  (In case the mention of Bach and minimalism in the same breath surprises you, I think there is a close connection between Minimalism and Pietism, a relationship which deserves its own post.)
Would old JS have liked this treatment of his music?  Of course, he would have!  The man who imported colorful Italian and French musical styles into the moribund North German church music tradition and wrote a cantata in praise of coffee would surely have loved it.  And one only has to listen to Bach’s Piano Concerto in D minor (BWV 1052), with its humorous flourishes and its repeated notes (more minimalism!), to know that this was a man who liked to play the keyboard.
And Carpenter’s delight and enthusiasm at playing the organ was evident throughout.  Hands stretched across two, three and even four keyboards, or jumping back and forth between them, along with feet playing 4-note chords or impossible contrapuntal parts (such as the opening voice of the D Major Fugue) or imitating the wild horses in the Erl-King, all showed a man enjoying himself immensely.   Even when a technical problem caused one keyboard not to sound, he remained enthusiastic.    The hall was only about half full, and all of us who heard him were lucky to have experienced this superb combination of enthusiasm, black-belt technical mastery, and intelligent musicianship.  Life has been better ever since!
POSTSCRIPT (2010-08-10): Not everyone shares my enthusiasm for Carpenter’s organ-playing.  I note that the writer and reviewers quoted in that review are themselves organists (or the children of), and wonder if Carpenter’s messing with tradition is what really upsets these folk.   For some reason I think of Karl Marx’s dictum that tradition comprises the collected errors of past generations.
References:
Cameron Carpenter web-site.  Edition Peters page.
Guardian preview here.  Pre-concert interview with BBC In Tune here (limited time only).

0 Responses to “Carpenter in Cottonopolis”