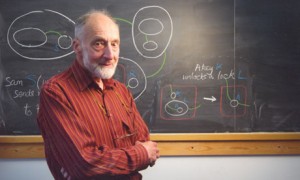 The death has just occurred of Robin Milner (1934-2010), one of the founders of theoretical computer science.   Milner was an ACM Turing Award winner and his main contributions were a formal theory of concurrent communicating processes and, more recently, a category-theoretic account of hyperlinks and embeddings, his so-called theory of bigraphs.   As we move into an era where the dominant metaphor for computation is computing-as-interaction, the idea of concurrency has become increasingly important; however, understanding, modeling and managing it have proven to be among the most difficult conceptual problems in modern computer science.  Alan Turing gave the world a simple mathematical model of computation as the sequential writing or erasing of characters on a linear tape under a read/write head, like a single strip of movie film passing back and forth through a projector.  Despite the prevalence of the Internet and of ambient, ever-on, and ubiquitous computing, we still await a similar mathematical model of interaction and interacting processes.  Milner’s work is a major contribution to developing such a model. In his bigraphs model, for example, one graph represents the links between entities while the other represents geographic proximity or organizational hierarchy.

Robin was an incredibly warm, generous and unprepossessing man. About seven years ago, without knowing him at all, I wrote to him inviting him to give an academic seminar; even though famous and retired, he responded positively, and was soon giving a very entertaining talk on bigraphs (a representation of which is on the blackboard behind him in the photo). He joined us for drinks in the pub afterwards, buying his round like everyone else, and chatting amicably with all, talking both about the war in Iraq and the problems of mathematical models based on pre-categories with a visitor from PennState. He always responded immediately to any of my occasional emails subsequently.

The London Times has an obituary here, and the Guardian here (from which the photo is borrowed).