The Guardian today carries a story about an effort at the UK National Musem of Computing at Bletchley Park to install and restore the world’s oldest working modern electric computer, the Harwell Dekatron Computer (aka the WITCH, pictured here), built originally for the UK Atomic Energy Research Establishment at Harwell in 1951.  The restoration is being done by UK Computer Conservation Society.
Note:  The Guardian claims this to be the world’s oldest working computer.  I am sure there are older “computers” still working elsewhere, if we assume a computer is a programmable device.  At late as 1985, in Harare, I saw at work in factories programmable textile and brush-making machinery which had been built in Britain more than a century earlier. 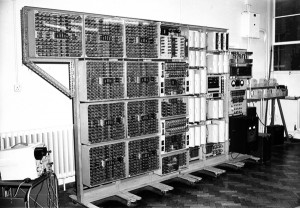 “One of the things that attracted us to the project was that it was built from standard off-the-shelf Post Office components, of which we have a stock built up for Colossus,” says Frazer. “And we have some former Post Office engineers who can do that sort of wiring.”
Frazer says he can imagine the machine’s three designers – Ted Cooke-Yarborough, Dick Barnes and Gurney Thomas – going to the stores with a list and saying: “We’d like these to build a computer, please.”
Dick Barnes, now a sprightly 88, says: “We had to build [the machine] from our existing resources or we might not have been allowed to build it at all. The relay controls came about because that was my background: during the war I had produced single-purpose calculating devices using relays. We knew it wasn’t going to be a fast computer, but it was designed to fulfil a real need at a time when the sole computing resources were hand-turned desk calculators.”