Following my post about Czech Tropicala-post-punk duo DVA, I thought I’d write about some other East European-flavoured music which I listen to a lot.
The first is the album Mnemosyne, by Ljova and the Kontraband, which I have mentioned previously for their setting of  poem by Joe Stickney.  Their music is a mix of East-European gypsy, klezmer and jazz, played by virtuoso performers on viola, accordian, bass and percussion (plus guests).   This mix could only happen in New York City, which is where they are based.
A genuine EE gypsy sound is the painful blues of Dona Dumitru Siminica (1926-1979), who sings this gypsy Romanian parallel to Rembetika in a falsetto voice, with accordian, cymbalon and bass and sometimes violin behind him.  The re-issue I am listening to comprises tracks originally recorded in Bucharest in the early 1960s.
The third album brings the accordian into the 21st-century:  arrangements of various fast-moving electronica tracks for a trio of virtuoso Polish accordianistas, Motion Trio. After this album, no one can ever say again that a gentleman is someone who knows how to play the accordian but refrains from doing so! 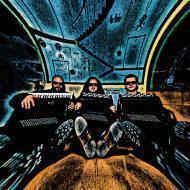