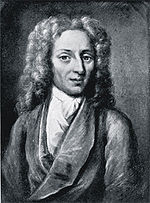 Nicolas Fatio de Duillier (1664-1753) was a Genevan mathematician and polymath, who for a time in the 1680s and 1690s, was a close friend of Isaac Newton. After coming to London in 1687, he became a Fellow of the Royal Society (on 1688-05-15), as later did his brother Jean-Christophe (on 1706-04-03).  He played a major part in Newton’s feud with Leibniz over who had invented the differential calculus, and was a protagonist all his life for Newton’s thought and ideas.
Newton and Fatio were particularly close friends in the period leading up to Newton’s nervous breakdown in 1693 (Manuel 1980), and some have speculated that Newton’s relationship with Fatio was somehow the cause of the breakdown. However, the two seemed to have remained on good, although not close, terms subsequently, and no doubt Jean-Christophe Fatio could not have become an FRS in 1706 without the approval of Newton, who was President of the Royal Society at the time. Among Fatio’s many activities, he co-developed a technique for drilling holes in rubies, a procedure of importance to precision watch-making through the 18th century.  Fatio is included (under the spelling “Faccio”) in Robert Allen’s list of 79 important inventors in seventeenth- and eighteenth-century Britain (Allen, p. 270).

In the first decade of the 18th century, Fatio become involved with a Millenarian sect which arose among the French Protestant Huguenot refugee community in London, the so-called Camisards or Prophets of Cevennes (Schwartz 1980). Despite legal repression and public humiliation of him and the sect leaders by the English authorities, he continued to support this movement for the remaining four decades of his life. The conventional wisdom among scientists of the period and subsequently was that this religious fervour was evidence of a sudden descent into madness. Charles Domson (1972/1981) has argued persuasively that Fatio had held religious beliefs since at least 1693, when he was still a close friend of Newton, and so any adoption of belief was not sudden. Moreover, he continued to undertake scientific work before and after his period of public association with the sect. Domson argues that, like Newton’s scientific, alchemic and scriptural activities, Fatio’s life was all of a piece. It is only a very condescending (and particularly modernist and Western) viewpoint that sees scientific activities and religious beliefs as being incompatible. (See Stephen Toulmin’s wonderful book on the pernicious effects of this viewpoint over the last three centuries.) This arrogant condescension has perhaps extended to Newton’s biographers: Manuel (1980) calls Fatio “the ape of Newton”, as if all he did was imitate the Great Man and then not very well (since Fatio got religion), while Gleick’s recent biography (Gleick 2003) tries very hard, if unsuccessfully, to not mention him at all. (Gleick does not appear to have read Domson’s book, for example.) In contrast, White (1998) writes at length, but scathingly, of Fatio; his vituperation is matched only by his ignorance of science, not understanding, for example, the difference between prediction and explanation.
Newton’s theory of gravitation was a predictive theory but not an explanatory one: it presented a mathematical model (the inverse square law) to predict the extent of influence which bodies of mass, such as planets, have on one another, but Newton’s model provided no causal explanation as to why this influence occurred. Fatio sought an explanatory theory of gravitation and was the first to propose a so-called “push theory” of gravity: objects of mass emit particles which create pushing forces on other objects (van Lunteren 2002). Although ridiculed at the time and since by physicists, push theories are now being taken seriously in physics (Edwards 2002). It seems that Nicolas Fatio de Duillier may at last receive some recognition for his contributions to science 250 years after his death, despite Newton’s biographers. I wonder when Fatio will himself get a biographer worthy of his or her subject, i.e. a biographer with knowledge of the calculus, of science at the beginning of the scientific age, of politics at the time of the Glorious Revolution, and sympathetic to millenarian religious impulses. This seems to be a rare combination of qualities, which only proves to me Fatio de Duillier’s distinction.

Between 1694 and at least the northern summer of 1698, Fatio was employed as a tutor to Wriothesley Russell (1680-1711), later the second Duke of Bedford. In 1695, Russell married Elizabeth Howland, daughter of rich land-owner John Howland, who bequeathed the couple land in the east end of London. Wriothesley Russell and his family used this land in 1696-1698 to build Howland Great Wet Dock (later called Greenland Dock), the first riverside dock in London. This dock was capable of holding 120 large ships, and, despite having no facilities for unloading or warehousing freight, was immensely successful commercially. Its success led to other docks being built — for example, Liverpool’s first dock was constructed in the early 18th century, and was the basis for that city’s subsequent trading dominance. During the same years as the dock construction was taking place, Fatio was investigating the impact of sunlight on fruit trees growing on sloping surfaces, undertaking experiments during the late 1690s and publishing a treatise on this topic in 1699. He would therefore have known something about creating artificial slopes and walls. An interesting question is whether Fatio had any involvement in the conception or construction of the Howland Great Wet Dock, or indeed Liverpool dock.
UPDATE (2010-01-01): According to Jane Longmore’s account of the building of the Liverpool wet dock, the world’s first commercial wet dock having facilities for unloading and warehousing ship freight, construction took place between 1709-1715.  The engineer engaged to oversee construction was Thomas Steers (c. 1672-1750).  According to the biography of Steers in the Oxford Dictionary of National Biography (Evetts/Chrimes 2006), Steers had acquired water engineering skills while a soldier in the Netherlands in the 1690s.  Steers does not appear to have worked directly on the construction of the Howland Great Wet Dock, although he married someone from, and lived in, nearby Rotherhithe while that dock was under construction, and also undertook land surveying work for the Howland family.   It is not clear why or how Steers was selected as the chief engineer for the Liverpool dock, although the Howland chief engineer, George Sorocold, had been consulted about the Liverpool dock prior to the passage of the enabling act of Parliament in May 1709, so Sorocold may have recommended Steers.  Given the mathematical calculation skills then required for such engineering tasks, and their relative rarity at the time, it is not inconceivable that Fatio and Steers were in contact prior to the construction of the Liverpool dock.   However, the dates of that construction (1709-1715) make it unlikely that Fatio was directly involved in work on the Liverpool dock, since he was at that time active and traveling with the Camisards.
UPDATE (2016-06-01): From 1710-1725, Newton lived at 35 St. Martin’s Street, just south of Leicester Square. Next to this site was a church built in 1693 for the French Protestant Community, the Leicester Fields Chapel, later called the Orange Street Chapel.  Newton and his housekeeper are said to have attended services there.  The site still has a church, now a Congregationalist one.

Note that the two articles above contain a minor error of fact: Fatio was employed from 1694 as a tutor to Wriothesley Russell, who was a grandson, but not, as stated there, a son, of the (first) Duke of Bedford.