In its brief history, computer science has enjoyed several different metaphors for the notion of computation.  From the time of Charles Babbage in the nineteenth century until the mid-1960s, most people thought of computation as calculation, or the manipulation of numbers.  Indeed, the English word “computer” was originally used to describe a person undertaking arithmetical calculations.  With widespread digital storage and processing of non-numerical information from the 1960s onwards, computation was re-conceptualized more generally as information processing, or the manipulation of numerical-, text-, audio- or video-data.  This metaphor is probably still the prevailing view among people who are not computer scientists.  From the late 1970s, with the development of various forms of machine intelligence, such as expert systems, a yet more general metaphor of computation as cognition, or the manipulation of ideas, became widespread, at least among computer scientists.  The fruits of this metaphor have been realized, for example, in the advanced artificial intelligence technologies which have now been a standard part of desktop computer operating systems since the mid-1990s.  Windows95, for example, included a Bayesnet for automated diagnosis of printer faults.
With the growth of the Internet and the Web over the last two decades, we have reached a position where a new metaphor for computation is required:  computation as interaction, or the joint manipulation of ideas and actions. In this metaphor, computation is something which happens by and through the communications which computational entities have with one another.  Cognition and intelligent behaviour is not something which a computer does on its own, or not merely that, but is something which arises through its interactions with other intelligent computers to which is connected.  The network is the computer, in SUN’s famous phrase.  This viewpoint is a radical reconceptualization of the notion of computation. 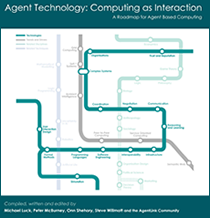 In this new metaphor, computation is an activity which is inherently social, rather than solitary, and this view leads to a new ways of conceiving, designing, developing and managing computational systems.  One example of the influence of this viewpoint, is the model of software as a service, for example in Service Oriented Architectures.  In this model, applications are no longer “compiled together” in order to function on one machine (single user applications), or distributed applications managed by a single organization (such as most of today’s Intranet applications), but instead are societies of components:

How should we exploit this new metaphor of computation as a social activity, as interaction between intelligent and independent entities, adapting and co-evolving with one another?  The answer, many people believe, lies with agent technologies.  An agent is a computer programme capable of flexible and autonomous action in a dynamic environment, usually an environment containing other agents.  In this abstraction, we have software entities called agents, encapsulated, autonomous and intelligent, and we have demarcated the society in which they operate, a multi-agent system.  Agent-based computing concerns the theoretical and practical working through of the details of this simple two-level abstraction.
Reference:
Text edited slightly from the Executive Summary of:
M. Luck, P. McBurney, S. Willmott and O. Shehory [2005]: The AgentLink III Agent Technology Roadmap. AgentLink III, the European Co-ordination Action for Agent-Based Computing, Southampton, UK.