Following my earlier post about the possibility of a work of art being an argument, I want to give another example.  This example is also drawn from Australian aboriginal society, and involves a 1997 claim for legal title to land by the Ngurrara people over land in the Great Sandy Desert of Western Australia.  Frustrated by their inability to convince the Native Title Tribunal of their right to the land, the Ngurrara community decided to create a collaborative painting (photographed below) which would demonstrate their traditional rights. The painting was presented, and accepted, as evidence before the Tribunal and is therefore a work of argument, as well as a work of art. 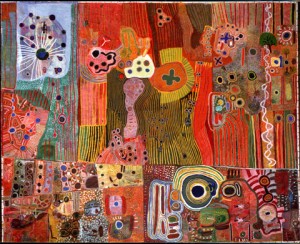 “In 1992, the Australian government first recognized the right of Aborigines to claim legal ownership of their ancestral lands – provided they could show evidence of having an enduring connection with them. Before proceeding to court, Aboriginal groups had to make their case before a Native Title Tribunal. Frustrated by their inability to articulate their arguments in courtroom English, the people of Fitzroy Crossing decided to paint their “evidence”. They would set down, on canvas, a document that would show how each person related to a particular area of the Great Sandy Desert – and to the long stories that had been passed down for generations.
“Ngurrara I”, the first attempt, was a canvas that measured sixteen feet by twenty-six feet and was worked on by nineteen artists. It was completed in 1996. But Skipper and Chuguna [two of the artists involved], in particular, didn’t feel that it properly reflected all the important places and stories, so more than forty additional artists were invited to produce a more definitive version. In 1997, “Ngurrara II”, which was twenty-six feet by thirty-two feet, was rolled out before a plenary session of the Native Title Tribunal. It was, one tribunal member said, the most eloquent and overwhelming evidence that had ever been produced there. The Aborigines could proceed to court.” (page 65).