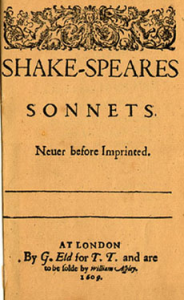 Last Thursday, 21 May 2009, was the 400th anniversary of the first publication of the Sonnets of William Shakespeare. Because printers during the reigns of Elizabeth I and James I/VI required official government approval to publish anything, official records exist of the date of publication. The 154 Sonnets are believed to have been written by Shakespeare in the early 1590s, for a patron whose identity is still unclear. Some believe the patron was Henry Wriothesley, 3rd Earl of Southampton, a man so handsome his image was reproduced more often than any of his contemporaries except Elizabeth herself.
As evidence, perhaps, for Wriothesley as Shakespeare’s patron, we may take Sonnet #20, in which every single line contains the letterr “h-e-w-s” or “h-u-e-s”.   This feature may be an encoding of HEnry WriotheSley, or it may be Shakespeare’s initials listed after “HE” (entangled with “HE”, in the case of h-u-e-s).  That this effect is deliberate is shown by the choice of “amazeth” (needed for the “h”) rather than “amazes” in line 8.

A woman’s face, with Nature’s own hand painted
Hast thou, the master-mistress of my passion;
A woman’s gentle heart, but not acquainted
With shifting change, as is false women’s fashion;
An eye more bright than theirs, less false in rolling,
Gilding the object whereupon it gazeth;
A man in hue, all hues in his controlling,
Which steals men’s eyes and women’s souls amazeth.
And for a woman wert thou first created,
Till Nature as she wrought thee fell a-doting,
And by addition me of thee defeated
By adding one thing to my purpose nothing.
But since she pricked thee out for women’s pleasure,
Mine be thy love, and thy love’s use their treasure. 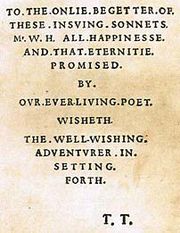