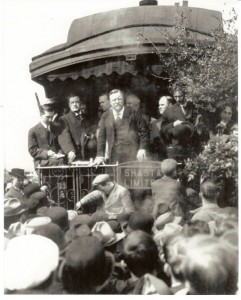 With the Presidential Inauguration in two days time, it is interesting to speculate on what sort of President Barack Obama will be.   BHO bears both striking similarities and striking differences with past US Presidents.  Like Lincoln, he is a powerful orator, intent on uniting a divided society. Like TR, he’s a great writer, an environmentalist, and a community organizer. What other single term could better describe TR’s varied occupations before the Presidency? Like FDR, he’s a pragmatist, even-tempered, and both cunnning and ruthless, politically. Like JFK, he’s an urban sophisticate, smart and very cosmopolitan. Obama’s concern for the poor and the underclass rivals that of the only socialist to become US President, LBJ.
Unlike Coolidge or Eisenhower or Reagan or Bush 43, Obama seems to be a hands-on manager, but let’s hope he’s a better delegator than were micro-managers Carter and Clinton. Like Adams 2, Jefferson, Adams 6, Hoover, Eisenhower, JFK and Bush 41, he’s lived abroad before becoming President. Like Jefferson, TR, JFK, Nixon and Clinton, but most unlike Coolidge, Eisenhower and Bush 43, he’s the brightest kid in the class. Like both TR and JFK, he’s risen through a corrupt local political machine, and like them, apparently without trace. Like both JFK and Reagan, he embodies style and panache, most unlike all the rest. Like Lincoln, Hoover (at least initially), LBJ, Nixon and Clinton, he’s made his own way in the world, without family wealth or patrons to help. Like TR, FDR, JFK and Bush 43, he seems to have confronted and conquered some personal demons along the journey. For some other Presidents – eg, LBJ, Nixon, Clinton – the demons remained unconquered, leading to problems while in office. For yet others – Hoover, Carter – the demons seem to have arisen only afterwards, as they sought to retrospectively justify their time in office.
In office, I believe Obama will govern most like TR:  an urbanite turned environmentalist, reflexive and articulate, able to organize community and society through words alone, and hard-nosed in defense and foreign policy.  And, like TR, he will be very much his own man in party-political terms, making as many enemies with his policy choices in his own party as outside it.