Gordon Goldstein has some advice for President-elect Obama in managing his advisors.  Goldstein prefaces his remarks by a potted history of John F. Kennedy’s experience with the CIA-planned Bay of Pigs action, an attempted covert invasion of Cuba.    Although Goldstein’s general advice to Obama may be wise, he profoundly mis-characterizes the Bay of Pigs episode, and thus the management lessons it provides.   As we have remarked before, one aspect of that episode was that although the action was planned and managed by CIA, staff in the White House – including JFK himself! – unilaterally revised the plans right up until the moment of the invasion.   Indeed, the specific site in Cuba of the invasion was changed – at JFK’s order, and despite CIA’s reluctance – just 4 days before the scheduled date.  This left insufficient time to revise the plans adequately, and all but guaranteed failure.  The CIA man in charge, Dick Bissell, in his memoirs, regretted that he had not opposed the White House revisions more forcefully.
Anyone who has worked for a US multi-national will be familiar with this problem – bosses flying in, making profound, last-minute changes to detailed plans without proper analysis and apparently on whim, and then leaving middle management to fix everything.  Middle management are also assigned the role of taking the blame.  This has happened so often in my experience, I have come to see it as a specific trope of contemporary American culture — the supermanager, able to change detailed plans at a moment’s notice!     Even Scott Adams has recorded the phenomenon. It is to JFK’s credit that he took the public blame for the Bay of Pigs fiasco (although he also ensured that senior CIA people were made to resign for his error).  But so indeed he should have, since so much of the real blame rests squarely with the President himself and his White House national security staff. 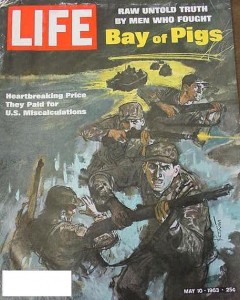 The Bay of Pigs action had another, more existential, problem.  CIA wished to scare the junta running Cuba into resigning from office, by making them think the island was being invaded by a vastly superior force.  It was essential to the success of the venture that the Cuban government therefore think that the force was backed by the USA, the only regional power with such a capability and intent.  It was also essential to the USA’s international reputation that the USA could plausibly deny that they were in any way involved in the action, in order for the venture not to escalate (via the Cold War with the USSR) into a larger military conflict.   Thus, Kennedy ruled out the use of USAF planes to provide cover to the invading troops, and he continually insisted that the plans minimize “the noise level” of the invasion.   These two objectives were essentially contradictory, since reducing the noise level decreased the likelihood of the invasion scaring Castro from office.
The Bay of Pigs fiasco provides many lessons for management, both to US Presidents and to corporate executives.   One of these, seemingly forgotten in Vietnam and again in Iraq, is that plans do matter.   Success is rarely something reached by accident, or by a series of on-the-fly, ad hoc, decisions, each undertaken without careful analysis, reflection and independent assessment.