Recently, I posted about probability theory, and mentioned its modern founder, Andrei Kolmogorov.  In addition to formalizing probability theory,  Kolmogorov also defined an influential approach to assessing the complexity of something.
He reasoned that a more complex object should be harder to create or to re-create than a simpler object, and so you could “measure” the degree of complexity of an object by looking at the simplest computer program needed to generate it.  Thus, in the most famous example used by complexity scientists, the 1915 painting called “Black Square” of Kazimir Malevich, is allegedly very simple, since we could recreate it with a very simply computer program:
Paint the colour black on every pixel until the surface is covered, say. 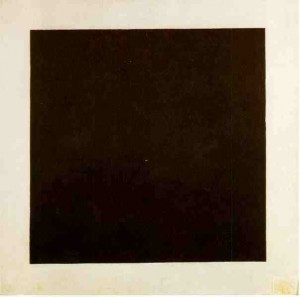 But Kolmogorov’s approach ignores entirely the context of the actions needed to create the object.   Just because an action is simple or easily described, does not make it easy to do, or even easy to decide to do.   Art objects, like most human artefacts, are created with deliberate intent by specific creators, as anthropologist Alfred Gell argued in his theory of art.  To understand a work of art (or indeed any human artefact) we need to assess its effects on the audience in the light of its creator’s intended effects, which means we need to consider the intentions, explicit or implicit, of its creators.  To understand these intentions in turn requires us to consider the context of its creation, what a philosopher of language might call its felicity conditions.
Malevich’s Black Sqare can’t be understood, in any sense, without understanding why no artist before him created such a painting.  There is no physical or technical reason that Rembrandt, say, or Turner, could not have painted a canvas consisting only of one colour, black.  But they did not, and could not have, and could not even have imagined doing so. (Perhaps only the 18th-century Welsh painter Thomas Jones could have imagined doing so, with his subtle paintings of near-monochrome Neapolitan walls.)  It is not a coincidence that Malevich’s painting appeared in the historical moment when it did, and not anytime before nor anyplace else.   For instance, Malevich worked at a time when educated people were fascinated with notions of a fourth or even further dimensions, and Malevich himself actively tried to represent these other dimensions in his art.  To imagine that such a painting could be adequately described without reference to any art-historical background, or socio-political context, or the history of ideas is to confuse the syntax of the painting with its semantics and pragmatics.  We understand nothing about the painting if all we understand is that every pixel is colored black.
We have been here before.  The mathematical theory of communications of Claude Shannon and Warren Weaver has been very influential in the design of the physical layers of telecommunications and computer communications networks.   But this theory explicitly ignores the semantics – the meanings – of messages. (To be fair to Shannon and Weaver they do tell us explicitly early on that they will be ignoring the semantics of messages.)    Their theory is therefore of no use to anyone interested in communications at layers above the physical transmission of signals, that is, anyone interested in understanding or using communication to communicate with other people or machines.
References:
M. Dabrowski [1992]: “Malevich and Mondrian:  nonobjective form as the expression of the “absolute”. ” pp. 145-168, in: G. H. Roman and V. H. Marquardt (Editors): The Avant-Garde Frontier:  Russia Meets the West, 1910-1930. Gainesville, FL, USA: University Press of Florida.
Alfred Gell [1998]: Art and Agency:  An Anthropological Theory.  Oxford, UK: Clarendon Press.
L. D. Henderson [1983]: The Fourth Dimension and Non-Euclidean Geometry in Modern Art. Princeton, NJ, USA: Princeton University Press.
Claude E. Shannon and Warren Weaver [1963]: The Mathematical Theory of Communication. Chicago, IL, USA:  University of Illinois Press.

0 Responses to “Complexity of communications”