Another great poem by Judith Wright (1915-2000), clearly influenced by the sprung rhythm of Gerard Manley Hopkins (whose rhythm was influenced by the triple repetitions of Robert Southwell).  She captures here particularly well the change in mood of the Australian beach after sunset but before dark.

The Surfer
He thrust his joy against the weight of the sea;
climbed through, slid under those long banks of foam –
(hawthorn hedges in spring, thorns in the face stinging).
How his brown strength drove through the hollow and coil
of green-through weirs of water!
Muscle of arm thrust down long muscle of water;
and swimming so, went out of sight
where mortal, masterful, frail, the gulls went wheeling
in air as he in water, with delight.
Turn home, the sun goes down; swimmer, turn home.
Last leaf of gold vanishes from the sea-curve.
Take the big roller’s shoulder, speed and swerve;
come to the long beach home like a gull diving.
For on the sand the grey-wolf sea lies snarling,
cold twilight wind splits the waves’ hair and shows
the bones they worry in their wolf-teeth. O, wind blows
and sea crouches on sand, fawning and mouthing;
drops there and snatches again, drops again and snatches
its broken toys, its whitened pebbles and shells.

Following Times go by Turns by Robert Southwell last week, this week a poet greatly influenced by Southwell, and a fellow-Jesuit, Gerard Manley Hopkins (1844-1889).  One of Southwell’s syntactic innovations was repetition:  writing several nouns or phrases one after another, in order to add emphasis.  Hopkins does the same in Pied Beauty, another poem for this northern autumn season. 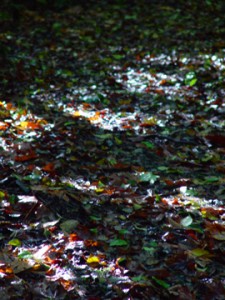 Glory be to God for dappled things—
For skies of couple-colour as a brinded cow;
For rose-moles all in stipple upon trout that swim;
Fresh-firecoal chestnut-falls; finches’ wings;
Landscape plotted and pieced—fold, fallow, and plough;
And áll trades, their gear and tackle and trim.
All things counter, original, spáre, strange;
Whatever is fickle, frecklèd (who knows how?)
With swíft, slów; sweet, sóur; adázzle, dím;
He fathers-forth whose beauty is pást change:
Práise hím.

The photo is by Rick Landry.