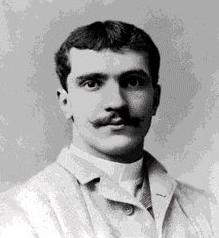 I’ve just read the memoirs of philosopher George Santayana, as mentioned in this earlier post.  They were published in three volumes, being written during and just after WW II.
The personal aspects of these memoirs are fascinating, and very enjoyable.   Santayana seems to have known everybody, or if not, he was related to them.  He had two families – one via his mother and father, Spanish colons in the Philippines, and one via his mother’s first husband and their children, American from Boston, not quite Brahmins but society people.  The two families, at least from this account, were Faulkneresque in their eccentricities, entanglements and bedevilments.  Santayana’s writing is as smooth as a gimlet and the reader is carried along as if reading a Doris Lessing novel.  No wonder the one novel he wrote – about his family and friends (The Last Puritan) – was such a financial success.
At least the first volume of his memoirs was smuggled out of Italy (where Santayana was living), allegedly with assistance from the Vatican’s international network, and published during the war.   It is therefore not surprising that it makes no mention, even allusively, to current political events.  Ditto the second volume.  I was surprised that even the third volume makes no real mention of the war, although it does contain a section near the end which seems to present Santayana’s political positions, although in an indirect and abstract way.   I wonder if the reticence was due to the extremity of his political beliefs.    Having been able to retire anywhere, he chose Rome and stayed there through the Mussolini years.   He also barely mentions the Spanish civil war in his memoirs, but perhaps this was still too close, with the possibility of his family being affected by his writing.   From the few comments he makes on matters political it is apparent he was a conservative, although he gives no good reasons for this.   (Nor could he.)
I can make no sense of Santayana’s writing in philosophy.   His writing typically consists of a sequence of abstract assertions and generalizations, none of which is supported by evidence or even argument.  Against each one I cavil and wish to argue the case, or at least to have  the pleasure of being the recipient of a case in support;  since he provides no justification for these assertions, argument-against them is difficult, and there are so many, it is tiring.   Perhaps this style was typical of the philosophy of his day.    I find that every academic discipline takes some significant statements or assumptions for granted, and that people in the discipline expend most their intellectual heft arguing over the trivial remainder.  People outside the discipline wonder how anyone could argue about the trivialities while ignoring the big issues assumed or implied at the start.
For the record, I’ll include here some quotations which struck me:

With parents evidently Catalans of the Catalonians how did my mother come to be born in Glasgow, and how did she ever meet a Bostonian named Sturgis?  These facts, taken separately, were accidents of travel, or rather of exile and of Colonial life; but accidents are accidents only to ignorance; in reality all physical events flow out of one another by a continuous intertwined derivation;” (page 8, Santayana 1944)
Catholicism is the most human of religions, if taken humanly:  it is paganism spiritually transformed and made metaphysical. It corresponds most adequately to the various exigencies of moral life, with just the needed dose of wisdom, sublimity, and illusion.” (1944, p. 98)
Even what we still think we remember may almost become the act of continually varying and misrepresenting his past, according to the interests of the present.  This, when it is not intentional or dishonest, involves no deception. Things truly wear those aspects to one another.   A point of view and a special lighting are not distortions.  They are conditions of vision, and spirit can see nothing not focused in some living eye.” (1944, p. 155)
It is or it was usual, especially in America, to regard the polity of which you happen to approve as sure to be presently established everywhere and to prevail for ever after.” (1947, p. 138)
Unattached academic obscurity is rather a blessed condition, when it doesn’t breed pedantry, envy or ill-nature.” (1953, p. 103)